Today is Thursday, we sheared on Monday.  I just now feel recovered!
Our shearers were scheduled to arrive at 10am Monday morning.  Sunday night we received a call and were told the time would be changed to 2pm.  I contacted our helpers and hoped they would still be able to come.  Considering the forecast of 100% rain we thought this might actually work out better.  We would be able to get alpacas into the barn and fans on in an effort to get them dry.
We did not pen them in the night before because we thought we’d have time to deal with wet alpacas first thing in the morning.  Instead, at 7:30am we received another call saying the shearers would be there at 10am.  The owners of the farm scheduled at 7 were not home when the shearers arrived, so this put them ahead about 4 hours!
We shifted to high gear, contacted our helpers, brought the alpacas in, set up pens so they could spread out, and turned on the fans!!
All’s well that ends well.  Suris dry more quickly than huacayas, we learned that!
Trying to stay organized, keep helpers organized, and shear alpacas in an orderly fashion we started with our light colors, shearing suris first, then moved to browns, multis, and black.  We are working with a certified sorter apprentice this year and by doing so are hoping to learn how to sort fiber ourselves. The fiber from all alpacas was taken off and carefully laid on a sheet of plastic, then rolled up so it can later be unrolled on a skirting table.
Head, tail, and belly can then be more easily identified and coarser fiber skirted away, versus throwing it all in a bag and having finer fiber contaminated by coarser fiber.
It was a great plan except that at the end of the day, all our neatly rolled blankets had to be unrolled and spread out on the barn floor to dry!  The best laid plans . .
Several days later the fleeces were dry.  We rolled them back up until next week when they will be unrolled again and sorted!

And now the alpacas all look a little silly.  Several days of cold weather followed shearing day.  I am sure we had some cold alpacas.  I would rather err on the side of having some cold weather than go into June with pregnant females still in full fleece.  With fiber that is warmer than wool, alpacas get hot!  Teeth, toenails, topknots and tails are trimmed on shearing day.  It’s kind of like a day at the spa, well not exactly . . .

Today the sun is shining.  It is warming back up and we have a herd of happy alpacas!

And lots of beautiful fiber!

We’ll be sorting our fiber next week, then making decisions about what we will do with our crop this year.  All grades of fiber can be used for something!  Click Raw Fiber  if you’re interested in purchasing some before it goes to the mill for processing. 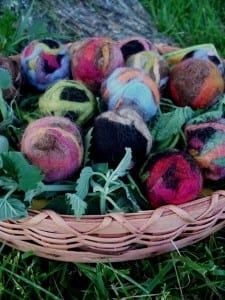 Guess Who’s In The News?