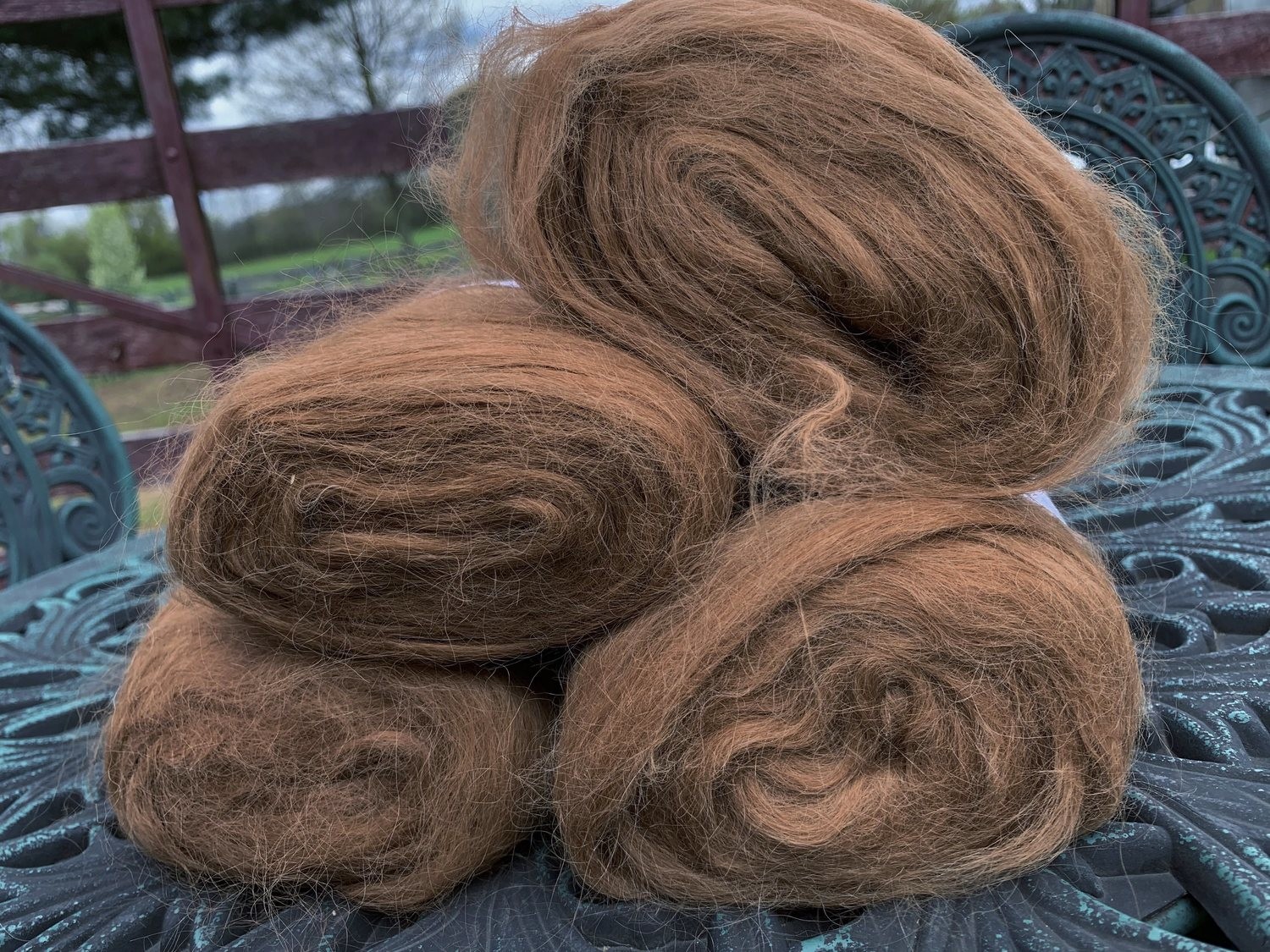 This listing is for 100% suri alpaca roving. Packages vary in weight and yardage with an eight ounce package having about 100 yards of roving.The color is brown, one of alpacas' many natural colors. This roving has been pin-drafted. Most roving is a wide strip of blended fibers that need to be pre-drafted, or split it into strips for easier handling during the spinning process. Pin-drafted roving takes care of that step for you!

Pin-drafted roving makes a great easy-to-spin treat for handspinners. Spin lightweight, Lopi-style singles, or draft the fibers out to make a finer yarn. It’s a great product for new spinners as the added processing usually makes it very easy to spin, with nicely organized fibers and very little spinner preparation required to make a beautiful yarn. You’ll find that hand-painted versions of this thin roving have a lot of great color blending, without much, if any pooling, as the short runs of color in the yarn blend more easily than the longer runs sometimes created with traditionally-sized roving.

Pin-drafted roving can also be used as is to create warm, lofty knitting and crochet projects, and works great as the weft for weaving projects. It’s a different and unique preparation, but well worth taking the time to spin on your wheel or spindle to create a beautiful, soft yarn.

The Suri alpaca is a member of the camelid family, which includes the llama, Huacaya alpaca, the wild vicuna and guanaco, and yes, the camel. The Suri dates back between 5 to 20 thousand years and is known from archaeological records to have been domesticated for 6,000 years.

Among the people of the Andes, the woven fabric from the fleece of the alpaca was so soft and alluring that it was used as currency. The Suri alpaca has unique fiber characteristics that distinguish the Suri from the rest of the camelid family. Unlike the soft fuzzy look of the Huacaya alpaca, the Suri's long, separate, distinctive locks are comprised of twisted or flat fibers that drape down the sides of the Suri's body. The Suri's fiber has a cool, slick hand. It is soft as cashmere, warmer than wool, with the luster of silk.

The first Suris were imported to the United States from Bolivia in the winter of 1991. Subsequent imports came in 1993, 1995, 1996 and 1998 from Peru, Chile and Bolivia. World wide, Suris account for only about 15% of the total alpaca population and are so rare that there may be fewer of them than the vicuna, the wild ancestor of the alpaca.

A suri in full fleece is absolutely breathtaking, with its locks blowing in the breeze. Suri fiber brings a premium price on the world market because of its unique characteristics and its scarcity.

Save this product for later
Display prices in: USD