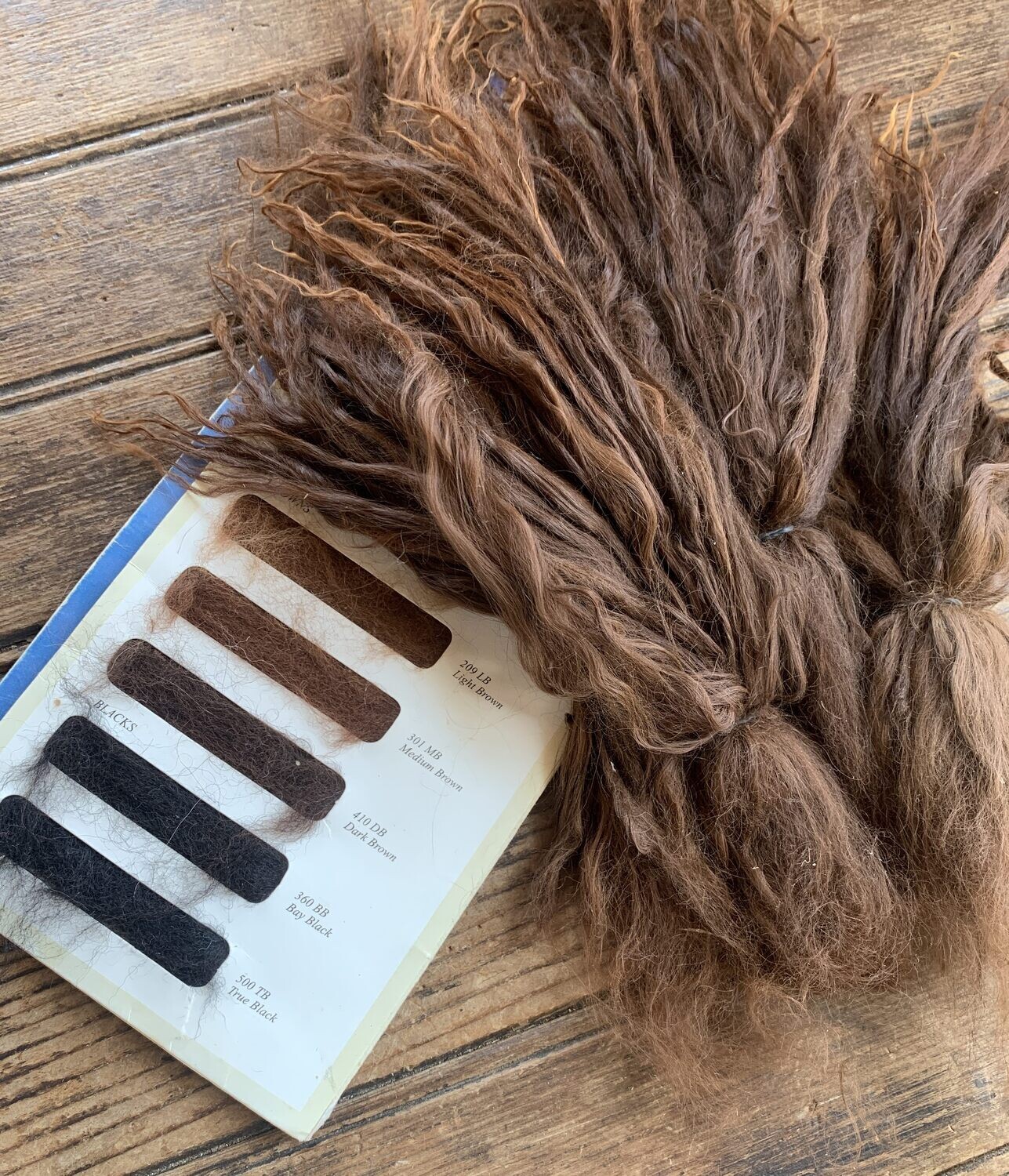 These Suri Alpaca Locks are the prime fiber grown by an alpaca named "Ragamuffin". The fiber has been separated from the fleece into individual locks that are aligned in the same direction. The locks are medium brown, according to The Alpaca Registry Color Chart, are small in diameter, and have a very pretty sheen to them. Locks are available in one and two ounce packages of locks that average 8" in length. This fiber is super soft and silky!

This fiber is washed, uncombed, and rubber banded in 1/2 ounce bundles. It has been picked through to remove tiny bits of hay and debris picked up in the pasture, but may still contain small amounts of vegetable matter that can easily be picked out as you work with it.

Suri is the rarer of the two alpaca breeds. Suri Locks make gorgeous doll hair. They can also be used in tail or core spinning, carded or combed and spun into beautiful silky yarn, or used in a variety of different felting projects. They also are fun to use in knitting, crochet, and weaving projects. Locks can also be left just as is and sewn into a weft to attach directly onto a doll cap.

These Suri Alpaca Locks are the prime fiber grown by a suri alpaca named "Sanders". They average 8" in length, some longer, some shorter. This fiber is considered dark fawn according to the National Alpaca Registry color chart, and is a natural color. Suri Locks make gorgeous doll hair. They can also be used in tail or core spinning, carded and spun into beautiful silky yarn, or used in a variety of different felting and craft projects. They also are sometimes used in knitting, crochet, and weaving projects.

The locks have been separated from the fleece so are very easy to work with. They have been rinsed multiple times, though you may want to do a final washing when your project is completed. The nature of the twist in suri locks makes it difficult to get them completely clean, but the more they are worked with, or combed, the cleaner they become.

Locks are the natural divisions in an animal’s fiber. Fiber in lock form has had the locks separated from the rest of the alpaca fleece. A single lock of suri is made up of multiple individual fibers. Separating the locks is not hard to do, but it does take time, and so is priced accordingly.

Suris have a fine fiber, with different degrees of fineness based on the age of the alpaca, nutrition, and environment where the alpaca lives. Fiber can be hand graded by certified sorters. It can also be scientifically measured in microns and graded according to this chart:


This fiber is considered Superfine. This fiber is sold in one and two ounce quantities, and banded together in 1/2 ounce bundles.

Doll makers love using suri locks for doll hair. Be aware that there is some waste when combing out locks for a reroot. A typical Blythe reroot takes about two ounces.

Locks can also be left as is and sewn into a weft to attach directly onto a doll cap.
Save this product for later
Display prices in: USD