Pregnant, or not pregnant, that is the question.  Bred just one time on May 14th of last year, to our herdsire Thunderstruck, Lorelei was still refusing to be bred again when behavior tested in August.  To me, that looks like a pregnant belly, and she is eating like there is no tomorrow.  What do you think?  I have been wrong before. 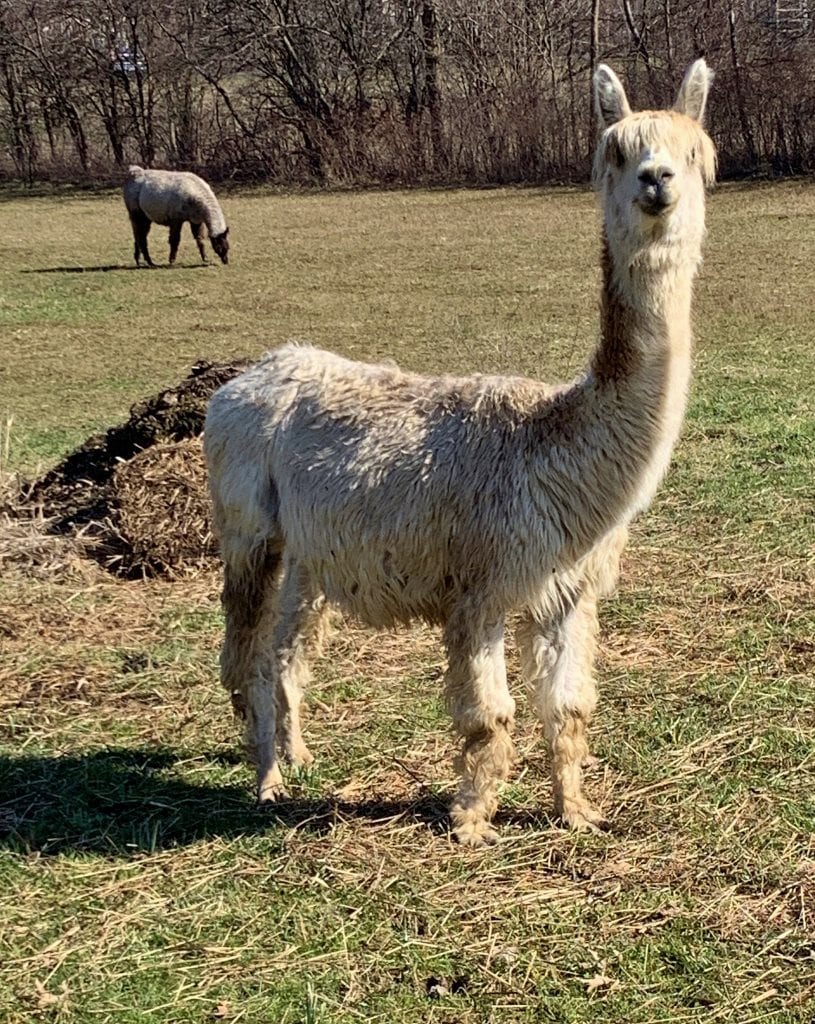 There was a time that our males got in with our females, we found them together, and determined they probably had been together the whole night!  Not a good thing.  Alpacas are pregnant nearly a year, so we calculated  approximate due dates, and realized we would be having babies in the winter.  Not an ideal time!  The closer it got, the more I watched, and each day I was sure I saw another baby move inside a pregnant belly, or so I thought.  We prepared for twelve babies, gathered cria coats, borrowed heat lamps, called alpaca friends to be on hand, gathered together towels, and supplies for birthing babies in the cold of the winter.  It turned out we had two babies born that winter.  Our eyes, and imaginations, sure can play tricks on us! 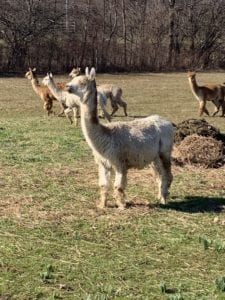 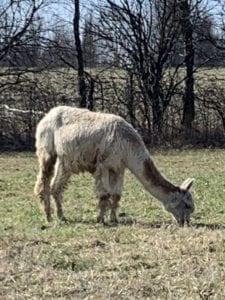 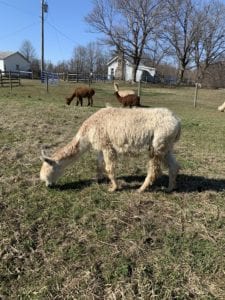 There was a day, that we would have a vet come do an ultrasound to determine alpaca pregnancy.   That is expensive and we haven’t done that in many years, so now we behavior test to determine pregnancy.  Once bred, we periodically put the male and female back together, first on a weekly basis, then monthly.  If the female is not pregnant, she will cush (lay down) and want to be bred.  If she is pregnant, she will either kick or spit at the male.  I always feel a little sorry for the males.  Rejection is tough.  The picture below is a male and female on opposite sides of the fence, cushed.  Sunshine is not being behavior tested, but she is definitely expressing interest in being bred! 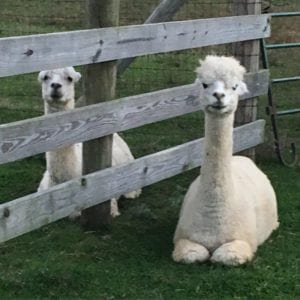 As a female approaches her due date, she eats and eats and eats.  After all there is a cria (baby) growing inside that will weigh between 12 and 24 pounds!  Towards the end of her pregnancy, she will do a lot of laying around and resting up for the big day.  When birth is close, she will isolate herself from the rest of the herd, will often do more humming than normal, and make frequent trips to the dung pile.  Sometimes she will do some rolling to get the baby in position.

Alpaca business is full-time for us, so we have been fortunate to see many of our cria be born.  There’s nothing better!  At times nerve wracking, most mothers need no help from us, but that doesn’t keep me from thinking I need to assist.  We try to watch from a distance, so as not to make mother nervous and slow down the process.  Most crias are born early in the day, before 2pm.  This is the case in alpaca’s native country of South America, because in the high altitudes of the Andes mountains, if a cria is not born early in the day before the temperatures drop, it does not survive. 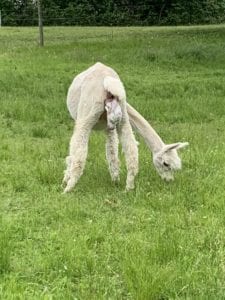 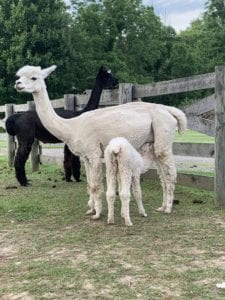 It is quite spectacular, though my mother will have nothing to do with it, to watch the miracle of alpaca birth.  Crias know that to survive, they must find food.  To find food, they must figure out how to use the long, lanky legs that have been folded beneath them for the last 11-12 months.  Usually within about an hour, a cria will be nursing his mama, and on its way to meeting the rest of the herd, then watching and learning from the others just how to be an alpaca, almost as if God had planned it that way!

The picture below is Lorelei and her first cria, named Shiya.  Shiya was one of the suspected 12 winter births I had anticipated a few years back.  She was born in January and her name means “ability to survive”. 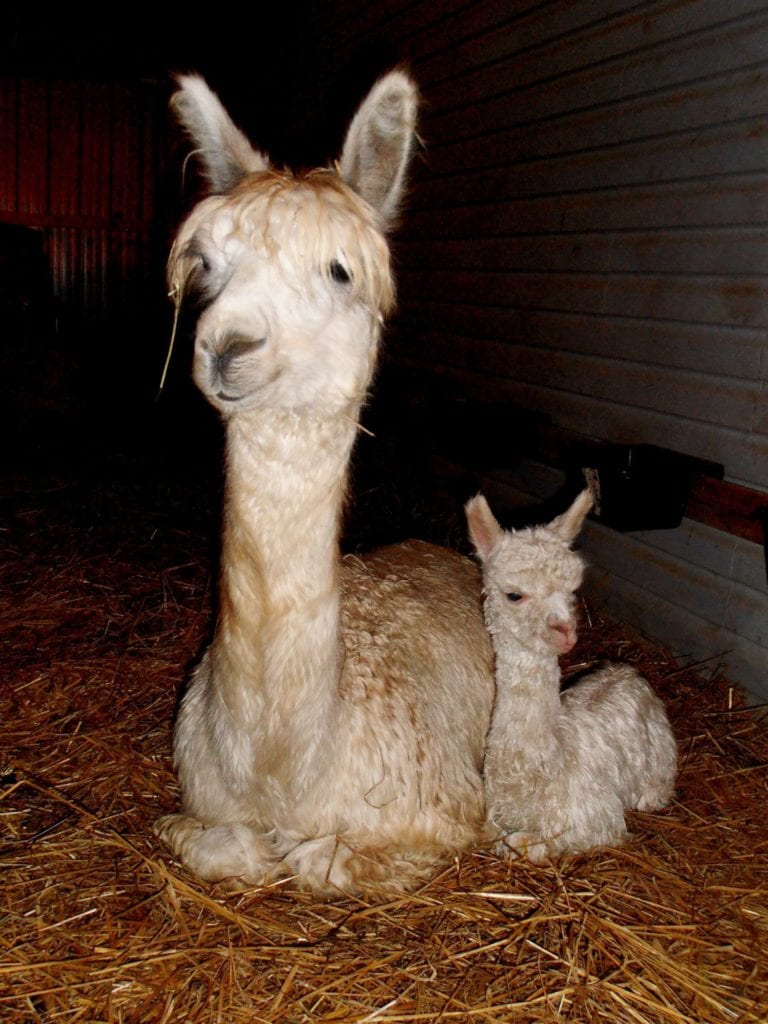 So if Lorelei is pregnant, she would be due around April 13th.  Stay tuned!  Though we have bred just a few of our alpacas, it won’t be long before Birthing Season is Upon Us!  Next we’ll be Preparing for Shearing Day, or maybe we’ll be doing both at the same time! 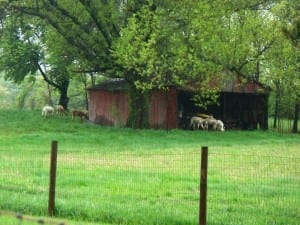 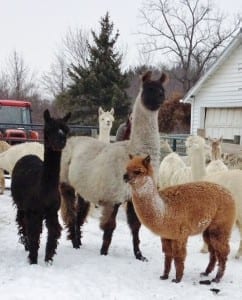 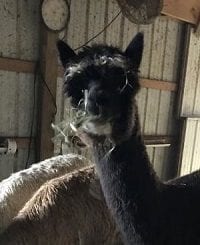