Groundhog Day is a holiday celebrated on February 2. It is held in the United States and Canada. According to folklore, if a groundhog emerging from its burrow on this day fails to see its shadow, it will leave the burrow, signifying that winter will soon end. If on the other hand, the groundhog sees its shadow, the groundhog will supposedly retreat into its burrow, and winter will continue for six more weeks
Why The Groundhog?
So, how did Groundhog Day get started?
The tradition is associated with Candlemas Day, an old Christian holiday commemorating the presentation of Jesus in the Temple. On Candlemas Day, clergy in Europe would bless candles and distribute them to the people in the dark of winter.
Candlemas Day was based on an even earlier pagan celebration called Imbolc,which marked a milestone in the winter (midway between winter solstice and spring equinox). There were numerous rhymes to
indicate that the weather on that particular day was important.
“If Candlemas Day is bright and clear, There’ll be two winters in
the year.”
The Teutons (Germans) decided that if the sun was out on
Candlemas Day, an animal would cast a shadow, predicting six more weeks of bad weather (the “second winter”). The animal used then
was either a either a badger or hedgehog. But when German
settlers took the tradition with them to Pennsylvania, they used
the groundhog (a type of woodchuck), which was abundant in the area.
Some Groundhog (Whistle Pig) Facts
The largest Groundhog Day celebration is held in Punxsutawney, Pennsylvania, where crowds as high as 40,000 have gathered to celebrate the holiday since at least 1886.
Did you know that Canada’s Groundhog Day relies on an albino groundhog named Wiarton Willie?  New York City’s official groundhog is called “Pothole Pete”.
Funny Groundhog Pictures
There actually is a Groundhog’s Day website with games, contests, and fun facts that might be fun to visit.
There are even Free Groundhog’s Day E-Cards!
HAPPY GROUNDHOG’S DAY

Early Morning at the Farmers Market 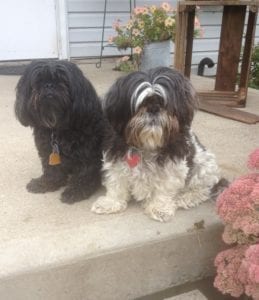